Ten Books that have Influenced my Writing 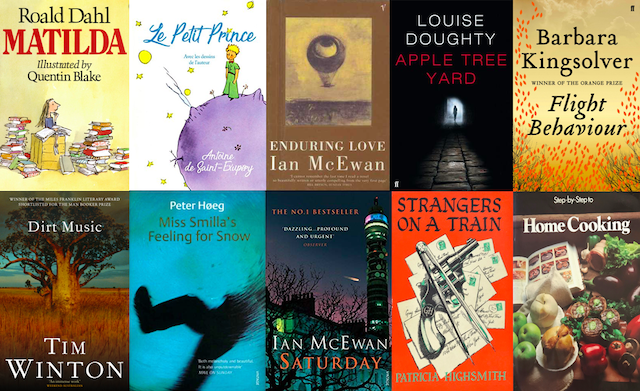 Last year I was invited onto a fellow author’s blog to talk about the ten books that have influenced my writing. It was difficult to choose out of the thousands I have enjoyed throughout my life, but when I look back more than a year later with two of my own novels published, the list still stands. Having recently completed my third novel and well into my fourth, I thought I should share these ‘influencers’ with you.

I mention this book not only for Dahl’s humorous narrative, but also for the fighting attitude of Matilda herself. She never gives up, and along my journey to publication, I’ve aspired to her spirit and positivity. I wouldn’t mind some of her psychic powers too.

This is another book that has been categorised as children’s literature. But like Dahl’s Matilda, I would encourage any adult who hasn’t yet had the pleasure, to read this magical story. Humans should all treat each other like The Little Prince’s rose. This allegorical tale is simply enchanting. After I’d mastered the French language, I enjoyed this book even more in its original version.

Strangers on a Bridge isn’t the only novel I have written involving a stalker, but it is the only one I’ve written in first person throughout, from the point of view of the victim. In my fascination for the way one human being can become so obsessed with another, I thought McEwan was clever in creating the tension surrounding his oppressor without ever allowing us to see into his psyche. My third psychological thriller allows the reader into the mind of the stalker, giving a whole new perspective to the menace.

Along with McEwan’s Enduring Love, this novel was a great lesson for me in how the writer can persuade the reader to form such a strong opinion about a supporting character and be completely misled at the end of the narrative. It has the ubiquitous twist of domestic noir fiction.

I adore Kingsolver’s narratives. Her earlier works The Bean Trees and Pigs in Heaven were favourite reads of mine years ago, but with Flight Behaviour she develops her characters to the next level of penmanship. The emotions in her relationships are tangible. And I love the analogies used for a struggling family and the peril of the magnificent monarch butterflies.

Winton is another author with the ability to create wonderful characters. What impresses me most with this particular novel is that although there are no speech marks or tags in the dialogue, the reader knows exactly who is speaking or thinking at all times. It takes skill to anchor a narrative so cleverly into the reader’s head, and with such beautiful prose.

This is the first Scandi crime novel I ever read, and it started the small spark of wanting to write something outside the Anglo-Saxon culture I grew up in. Living in Switzerland gives me a different platform. Although my writing is not as gritty as some Scandi noir novels, the landscape in the Alps often lends itself to dark dramatic narratives.

McEwan has wiggled his way twice onto my list. His writing often polarises people, and this book is no different. I read this cleverly plotted novel in one sitting. This literary crime story takes place over one day. I was entirely absorbed with the characters and setting. It challenged me to look at everyday tasks, to describe them in an engaging way, and to have something spectacular happen at the moment you are least expecting it.

When the early drafts of my debut Strangers on a Bridge were receiving attention, a respected editor compared the creeping tension in the narrative to the writing of Highsmith. I was naturally flattered. Highsmith creates characters the reader loves to hate, such as Charles Bruno, but also characters who draw empathy from the reader despite their villainous deeds such as Guy Haines, and in her later novels, Tom Ripley. When I began searching for a title for my novel, I was very much influenced by Highsmith.

This is not, obviously, a novel. I received it as a gift from my mother over thirty years ago. I’ll let you decide why this has helped my writing, my marriage, and my life in general.